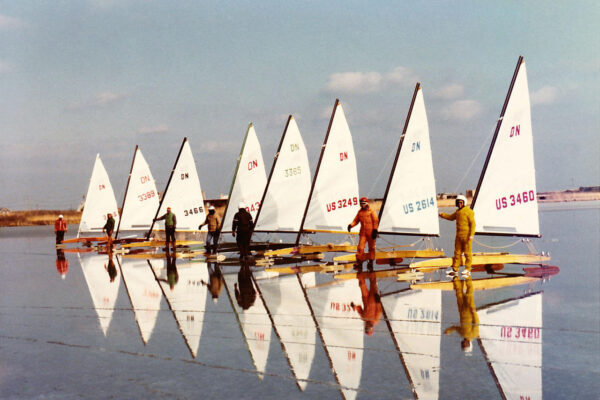 Ice boating is a Water Mill tradition that originated in Holland in the early 1600s as a practical means to transport goods during the winter months when the water was frozen solid. Brought to America by the Dutch settlers, these original ice boats were rudimentary in design; basically ice skates attached to the bottom of a wet-water boat.  While the first boats were used for transportation and trade, over time ice boating evolved into a recreational activity.  In his January 1837 diary entry Daniel Hildreth noted that he and Charles Howell sailed across the frozen Hayground Bay in an ice boat they built themselves, the first ever constructed in Southampton.  By the turn of the century, more local residents took up ice boating and in 1927, the Mecox Bay Ice Yacht Club was formed with five boats. A recreational activity soon turned into a highly competitive sport and over the years the design of the boats evolved and new enthusiasts became involved.  What has never changed is the love of the sport, the long-standing traditions and the camaraderie between families and friends.

This season the Water Mill Museum will be exhibiting photographs from the private collections of local families along with memories highlighting the history of ice boating in Water Mill.

Make sure to copy Registration number after successful submission.

Thank you for payment.

Your ticket for the: Water Mill Museum Ice Boating Exhibition