Water Mill – a Long Island community sticking out into the Atlantic – has always been vulnerable to hurricanes.  They were known locally as equinox storms because they often occurred around the time of the autumn equinox on Sept 22.  It was not until the mid 20th century that the storms were called by the Carib Indian word “hurricane.”

Daniel Hildreth of Seven Ponds Road, in an entry in his diary, wrote about the September 20, 1815 storm when “the sea rose so high it swept down all most every bank the length of the island.  The bay rose so high it ran up in the Mill Pond.  It drove sand into ponds & creeks and buried valuable land & meadows.”  There were other powerful hurricanes between 1821 and 1869 and then a lull for 69 years when a most destructive storm struck eastern Long Island on September 21, 1938.

At that time the beach and Mecox Bay were not as extensively developed as today.  There were only two summer houses, some fishing shanties and a beach club building on the Water Mill beach.  Mecox Bay was flanked on three sides with open fields.  From experience farm families knew enough about ocean storms to locate their homes away from Mecox Bay.  A few summer homes were located on high ground on the northern end of Mecox Bay along Hayground Cove and Mill Creek.

The 1938 storm arrived at high tide and strong winds created a 15 foot storm surge.   The wall of water traveled north across Mecox Bay up Mill Creek and pushed the creek north into Mill Pond.  The water in Mill Creek rose as high as the main floor of the water mill, now the Water Mill Museum. One of the two summer houses on the beach was destroyed, all the fishing huts were demolished, the beach club was leveled and its debris washed across Mecox into the fields at Mohawk Ave.  The Cobb Isle and Channel Pond bridges were dislocated and floated into the bay.  Many of the farm fields around Mecox were either flooded with salt water or had their crops washed out by the heavy rains.  Previously Dune Road/Flying Point Road had 40 to 75 foot high dunes but the surge flattened them and washed most of the sand into Mecox Bay. 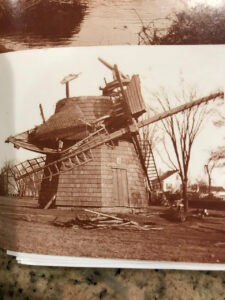 Although no homes inland were completely destroyed many were damaged by fallen trees or winds that ripped off roofs and knocked over chimneys.  Small farm buildings were blown across the fields.  The belfry of the Water Mill School was destroyed, the cap of the Corwith Windmill was blown off and the railroad tracks at Scuttle Hole Road washed out. Fallen trees blocked the main roads.  Although 29 died in surrounding communities and over 500 in New England there was fortunately no loss of life in Water Mill.

There have been nearly a dozen hurricanes since 1938 that have caused crop damage, toppled trees and damaged buildings.  Most of these storms were classified minimal or moderate with winds or gusts between 75 and 95 miles per hour. The last significant storm was Hurricane Gloria in 1985.  It is expected that a category 2 or 3 hurricane with winds up to115 miles per hour will hit eastern Long Island in the near future.  The structural damage will be more extensive because so many buildings have been built on the ocean and in the flood plains around Mecox Bay.

For more information about hurricanes and for a first hand account of the 1938 hurricane in Water Mill consult, “Water Mill Celebrating Community, the history of a Long Island hamlet, 1644-1994.”
This book is available at the Rogers Library or may be purchased at the Water Mill Museum.

Your ticket for the: Hurricanes in Water Mill